If you haven’t noticed, we could be the spokes-family for any number of sunblock brands: 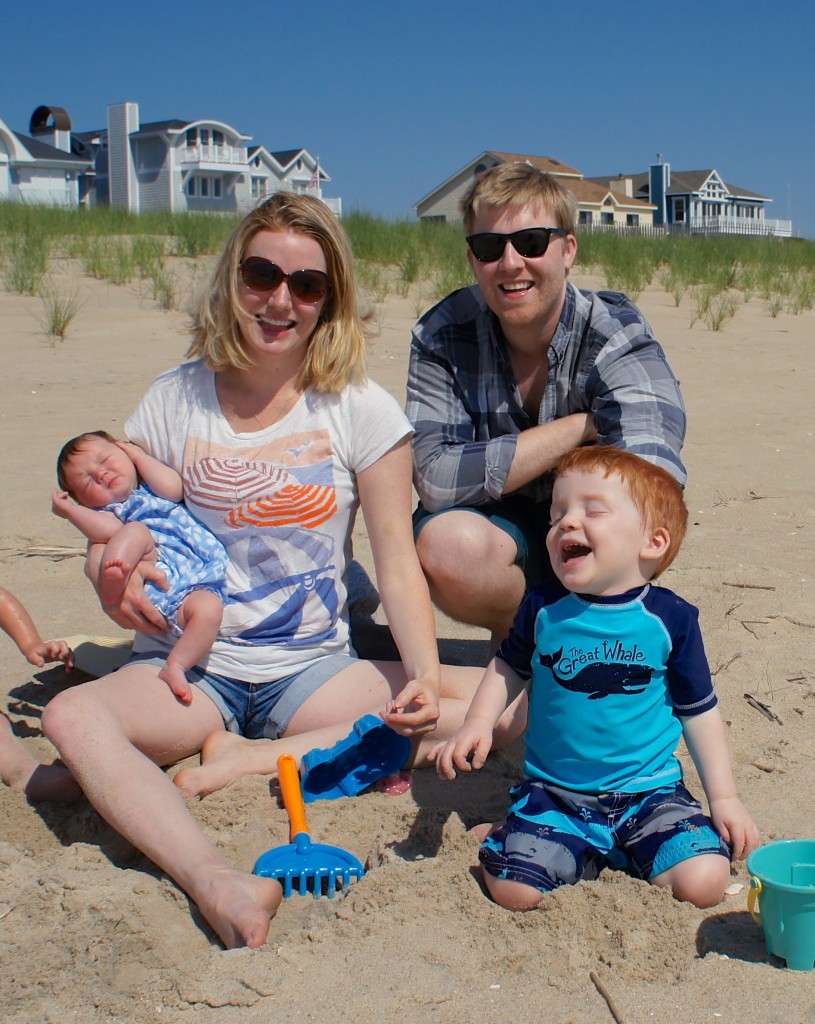 I’m super strict about long sleeve shirts and hats from 10 am-2 pm when UV rays are at their peak, and there’s a bottle of sunscreen in every room of our house.  I’ve always used Neutrogena baby, thinking I’m being a good mom by protecting my kids.  Our pediatrician says not to use sunblock before six months, to keep infants covered instead.  That was fine for my son, but when it’s 95 degrees and my toddler is climbing the walls if he doesn’t get several hours of fresh air a day, I can’t exactly put Georgia in a snowsuit.  So, the other day I started investigating whether a little sunblock on her arms and legs was really that bad.  Maybe it was one of those rules they make across the board, even though it’s really only to prevent people from putting bug combos riddled with DEET on their newborns.

I was completely wrong.  The sunscreen I’ve been using on my son (and many other brands) contained Retinyl Palmitate, something I definitely don’t want to put on my babies.  A replicated study by the Environmental Working Group found:

We are by no means health nuts, we try to feed our kids mostly organic foods, but there’s plenty of junk in their diets, and I hardly live in a toxin free home.  I can be a bit of a clean freak, and as far as I’m concerned nothing works as well as bleach.  Still, I saturate my kids with sunblock multiple times a day during the summer, so I want to make sure I’m not covering them in carcinogens.  Babyganics Mineral Sunscreen had good Amazon reviews, didn’t contain Retinyl Palmitate, and was reasonably priced.  I liked it and was using it on Grant for about a week before a friend of mine recommended I check out the Environmental Working Group’s product guides.  She said they seemed reputable and weren’t sponsored by Coppertone (or any other type of business).  As it turned out, my Babyganics contained Octinoxate, which caused:

“Endocrine disruption: Octinoxate increases cell proliferation in cells that grow in response to estrogen exposure [2,6,7]. Lifetime estrogen exposure is an established risk factor in the development and progression of breast cancer. Octinoxate affects other hormone systems as well. For instance, it reduces thyroid hormones in blood serum [8]. Thyroid hormones are critical for metabolic functions in the body including mammary gland development. Octinoxate exposure has also been found to alter the reproductive systems of female offspring, with significantly lowered hormone (estradiol and progesterone) levels [1], which is associated with infertility and miscarriages. In males there is a reduction of sperm count at all dose levels [1].”

Yeah, so that was off the table for Georgia.  The nice thing about EWG’s website is that you can look at a list of pretty much every sunblock imaginable (along with all other types of products) from best to worst.  Their highest rated was Butterbean Sunscreen, but one of the Amazon reviewers said it was so thick her child screamed the entire time she tried to rub it on, and his skin was red and splotchy after having to almost scrape it off.  That didn’t sound like fun.  Eventually I settled on Babo Botanicals Clear Zinc Sunscreen.  It had a limited number of questionable ingredients, and all of them were very low on EWG’s scale of health risks.

I tried it out on myself and Georgia when it arrived.  First impressions weren’t great.  It was really sticky, even though the smell was amazing.  After a couple minutes, though, it seemed to settle into my skin and the stickiness went away.  Georgia wasn’t bothered at all, so we were good to go. 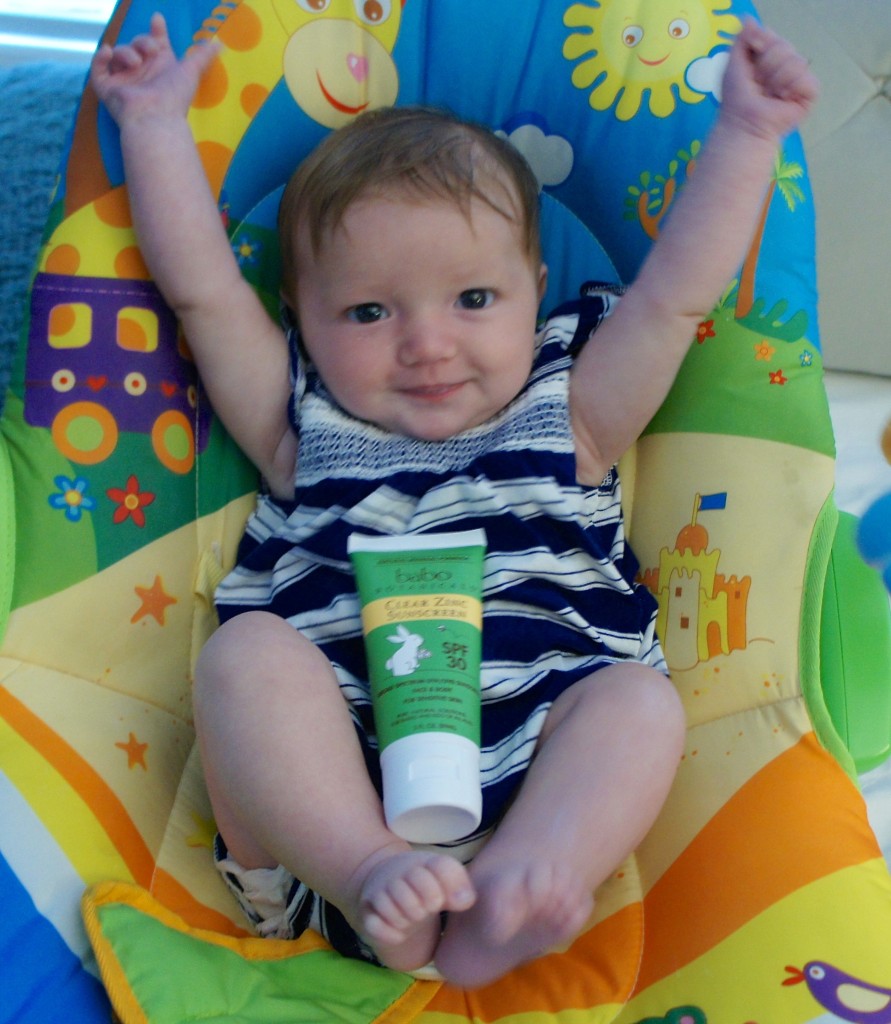 It does take a bit of rubbing to get covered, so I’m still using the BabyGanics on Grant until I run out, after which we will try something new.  Sunscreen applications that take longer than 30 seconds are not exactly toddler-friendly.  It’s good to know there are some safe products available for infants, and I’m sure Georgia appreciates being able to wear shorts in this heat wave! 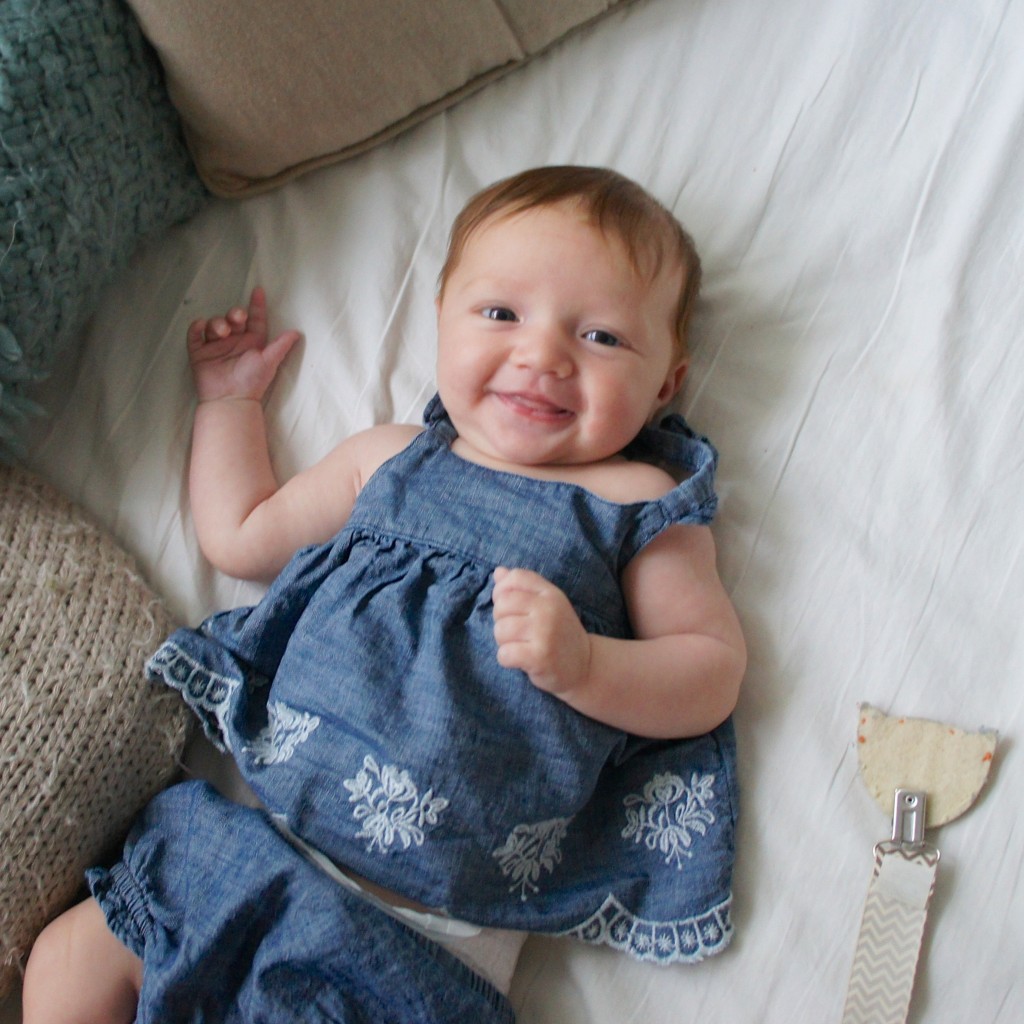 Previous Basement Overhaul
Next Back in Action