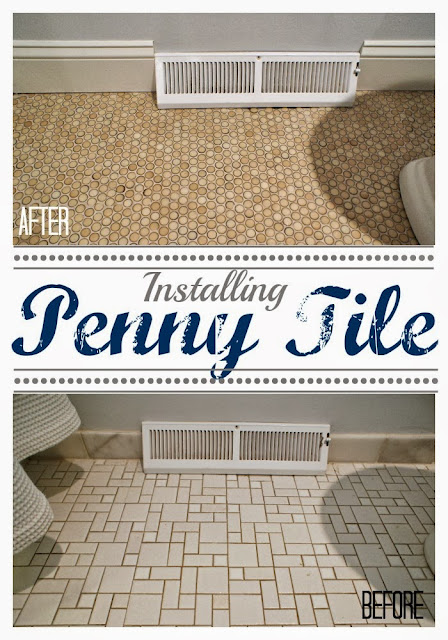 Ugh.  Penny tile.  On the one hand, this stuff was really easy to install.  I didn’t have to cut a single tile.  On the other hand, the grout haze removal-which is my least favorite part of tiling, has etched my hands into permanent claws.  This is what I now look like: 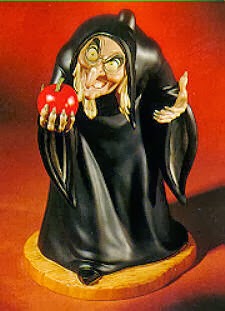 What I anticipated being the hardest part, removing the old tile, was actually the easiest.  I used a sledge hammer to crack a couple tiles, then slid a chisel underneath what broke, and hammered the chisel all the way in.  The tiles popped up in huge chunks and the mortar came up with it.  A lot of the forums I read said I would need to rent a tile remover and the possibly replace the subfloor, but my subfloor was still perfectly smooth and level after removing the tile, so that was it.
Laying the penny tile was easy, too.  It’s on a grid, so the end pieces just fit together.  I started with the straight end against the tub, the one area of the room where I can’t put baseboard: 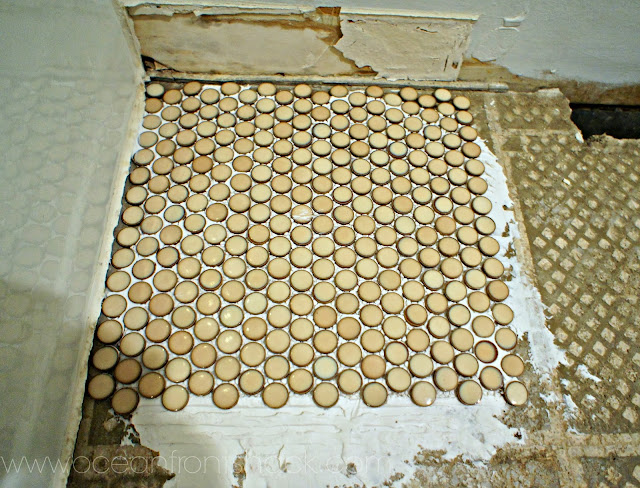 The diamond pattern on the subfloor is stain from the old mortar, but there isn’t any residue.  I had to be very careful to sweep and vacuum away any traces of mortar that had chipped off, because the tiniest fragment beneath the penny tile made it noticeably uneven.
When I got to the door casings I would tear the grid and remove whatever tiles I didn’t need. 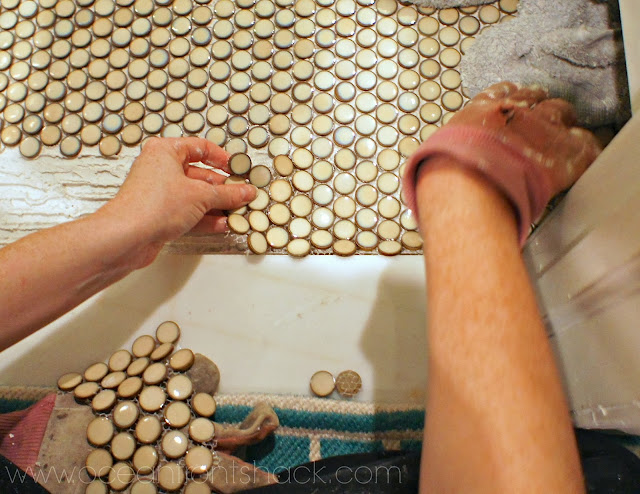 The picture above was taken when I reached the threshold, see the pieces that don’t fit flush?  I just popped them off: 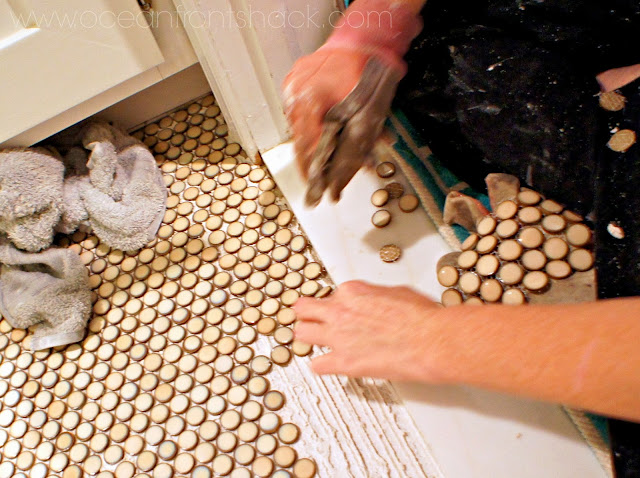 That was it, no wet saw, no cuts, the tiles were so small I was able to grout the gaps.
The key to everything was using a light hand with the mortar.  If I had too much mortar it would come up between the tiles and fill what should be the grout lines.  (I like to watch Gossip Girl when I work, I’m only on season 4 and I’ve been watching for over a year.  It’s utter crap, but surprisingly entertaining.) 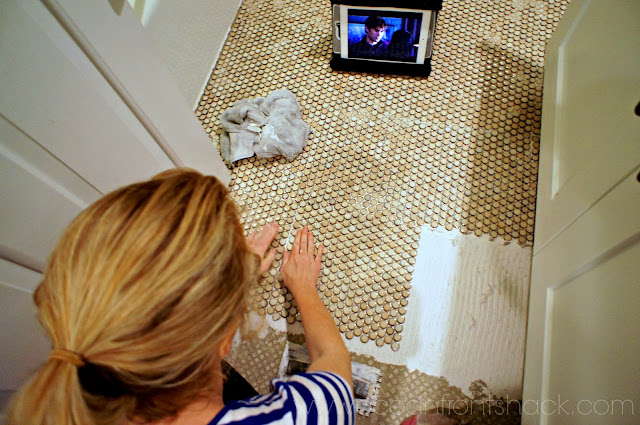 The real trouble began after the grout dried.  I used a latex grout, which is supposed to stay moist and keep from cracking when you’re doing grout lines over 1/8″.  The grout lines were so large between the penny tiles that each tile had a substantial amount of grout haze.  I ended up scrubbing for hours both yesterday and today.  I read some tiling forums afterwards and the professionals wipe the grout haze thirty minutes after they finish grouting (I waited two hours) with a microfiber cloth.  I wish I’d had the foresight to look into that before I started.  Oh well, hopefully that advice helps someone else! 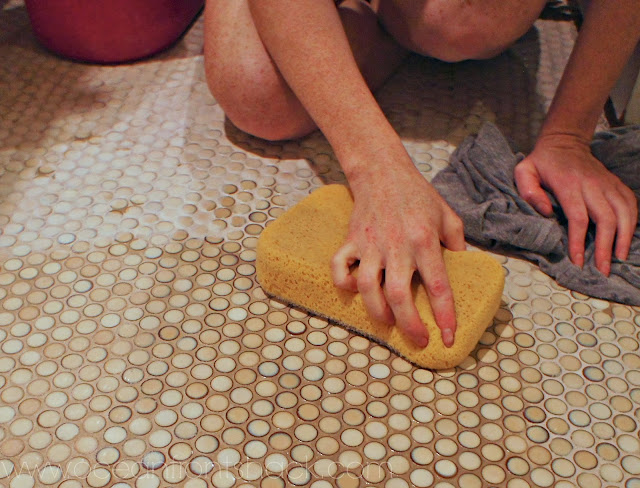 My hands may be locked into claws for the rest of my life.  Jason helped for an hour and half this morning, and between the two of us we got half of the room done.  Then I told him my fingers were going to start bleeding if I scrubbed anymore and he said he would finish.  Literally, three minutes later he came downstairs and told me the rest of the room was done.  My next project will be digging a hole in the backyard for his body.
I’ll do a “reveal post” once I finish caulking all the trim. For now, here’s a sneak peak: 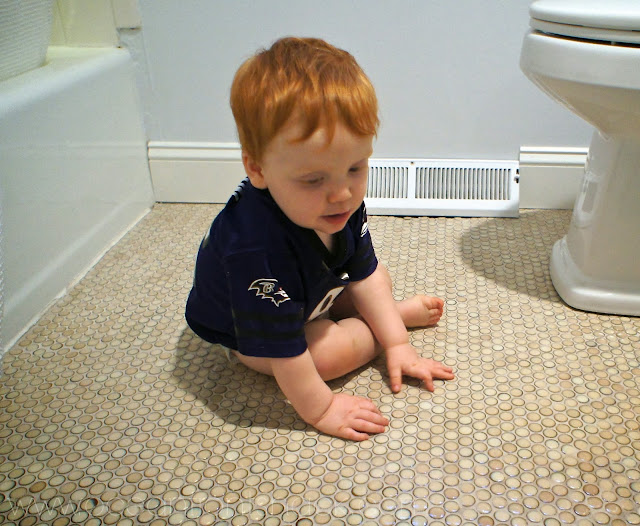 Grant keeps rubbing it and saying “balls”.  I should have time to get the finishing touches done tomorrow morning.  The kid is going to his grandparents for the evening because we have our neighborhood dinner club.  I know, we’re classy.  We probably have run to the liquor store, because I’m not sure it’s appropriate to bring box wine or Miller High Life. 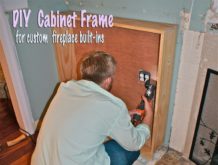 The Servary Guide to Stairs