We had the honor of hosting Thanksgiving dinner for the first time this year.  Which is no easy feat considering the only foods that have seen the inside of my oven in the past six months are fish sticks and frozen pizzas.  My in-laws were here to help, thankfully, so I managed to pull off a homemade pumpkin pie the night before.  Luckily I also made pumpkin ice cream, which covered the fresh tire tracks my son imprinted shortly before dinner: 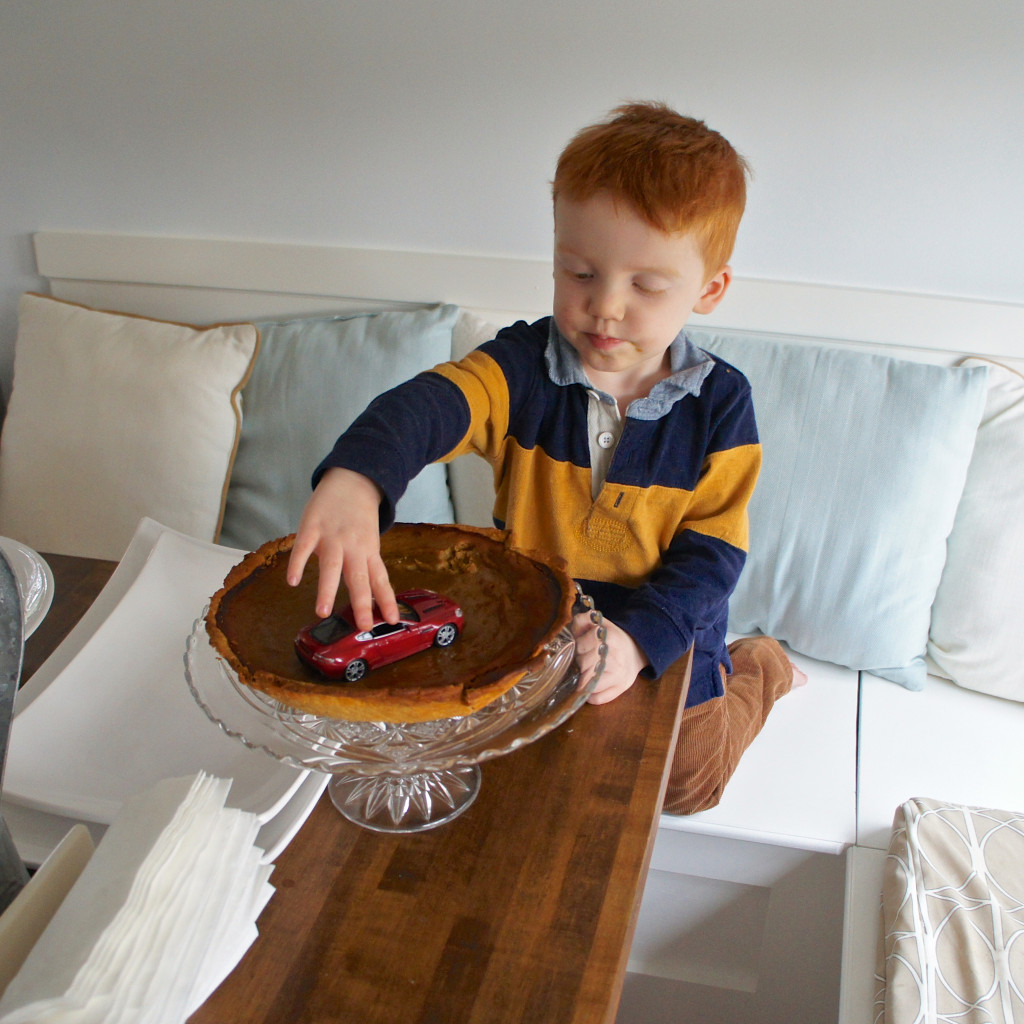 We managed to squeeze twelve people around a table meant for eight, so I didn’t have room for too large a centerpiece, but still wanted to create something special for in honor of our first Thanksgiving.  Jason bought a huge bag of birch logs to put in the fireplace the night before, which sparked an idea. 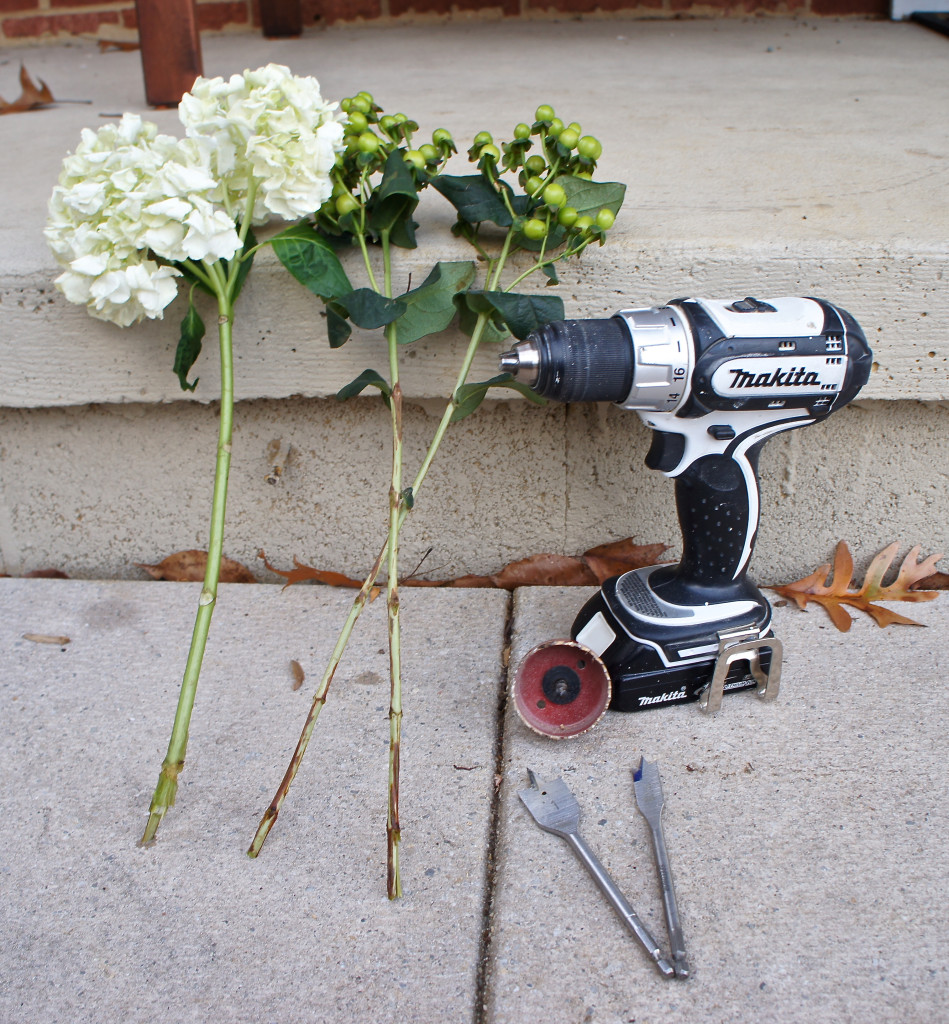 We already had all of these items, so our centerpiece cost a grand total of….$0.  Right on budget.  Even if you had to buy everything, though, the total cost probably wouldn’t be more than $10.

A paddle bit is a wide drill bit that looks like a flat head screwdriver with a pointed end.  They make wide holes in wood, and are no harder to use than a regular drill bit.  Jason used a 1/2″ paddle bit to make holes for the flower stems to fit through. 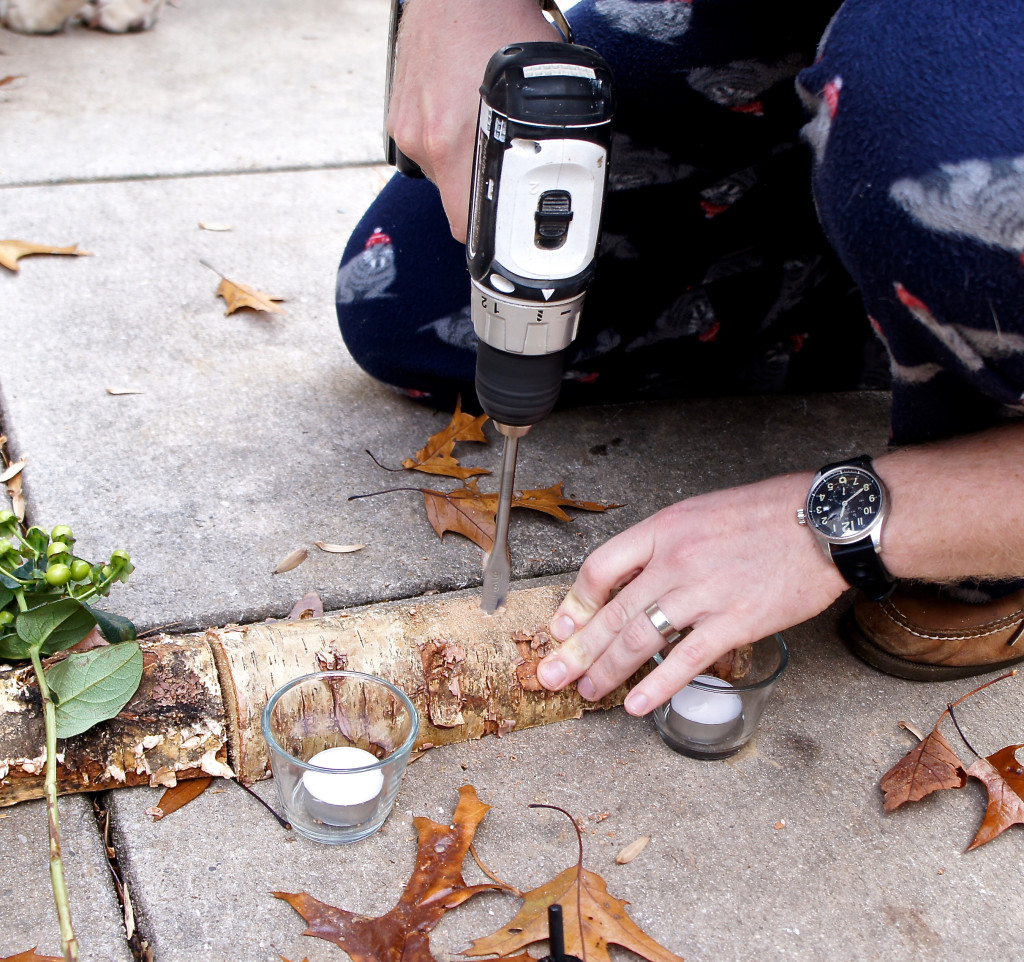 We didn’t have a bit as wide as the base of our candle holders, so to create an opening where they would fit Jason drilled several holes right next to each other, only going about halfway through the log.  It isn’t pretty-but no one can see once the candles are in place. 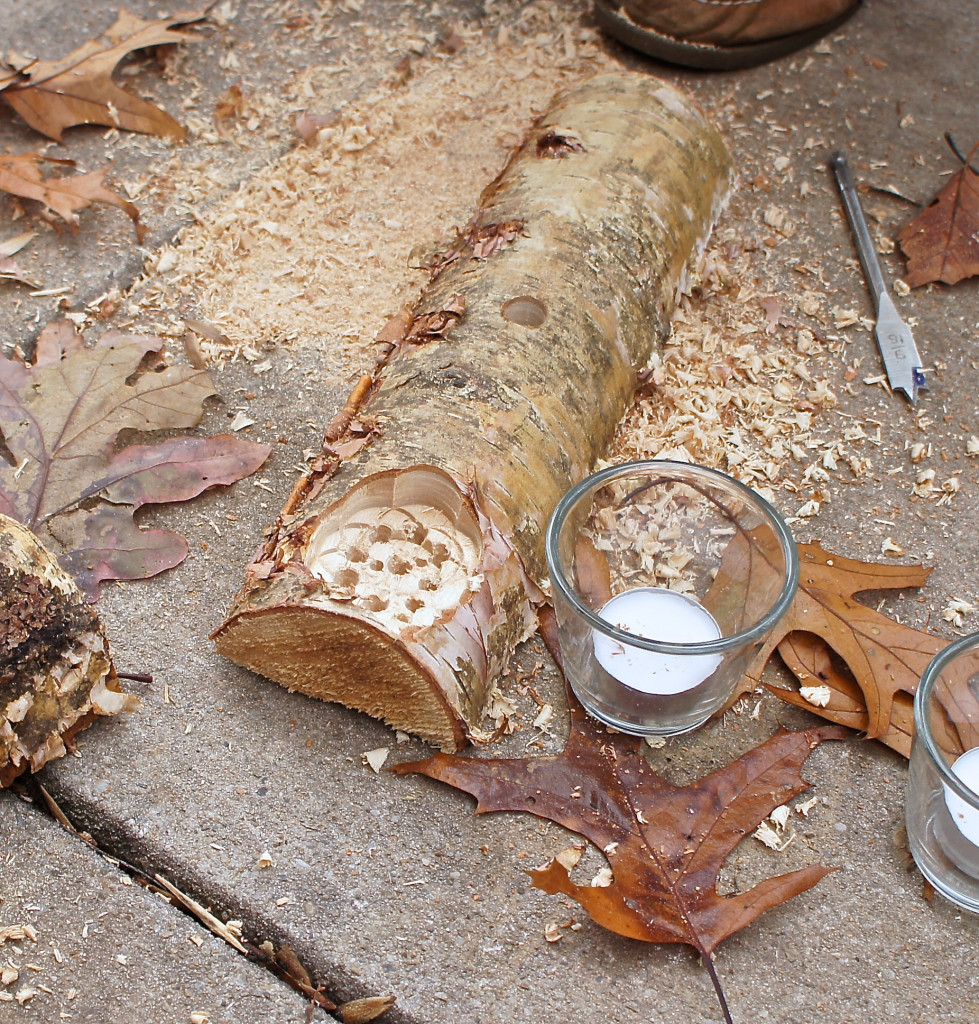 After setting everything on the table, I picked apart a Hypericum stem (a green filler berry that I found in the floral department of the grocery store) to dress it up a little. 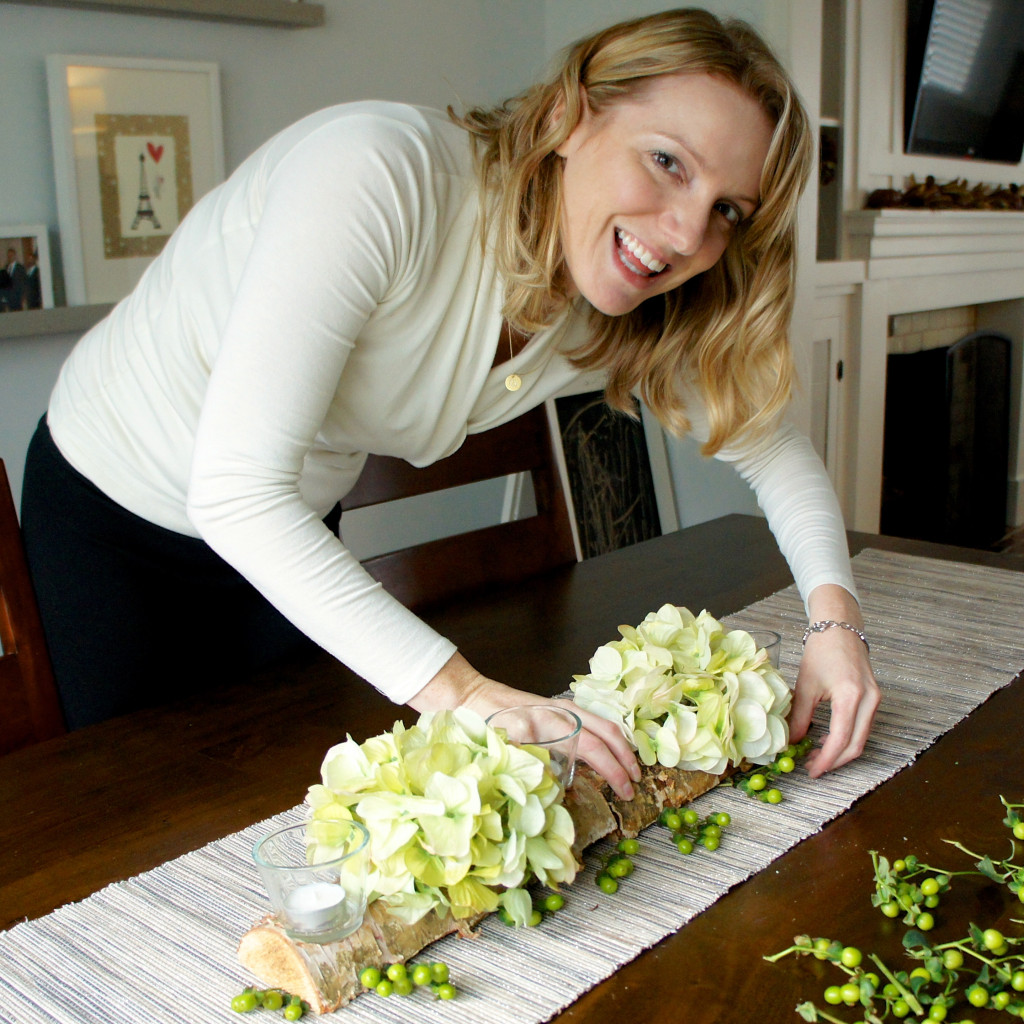 The final product was festive and (most importantly) sat low on the table so everyone could still see and talk to one another. 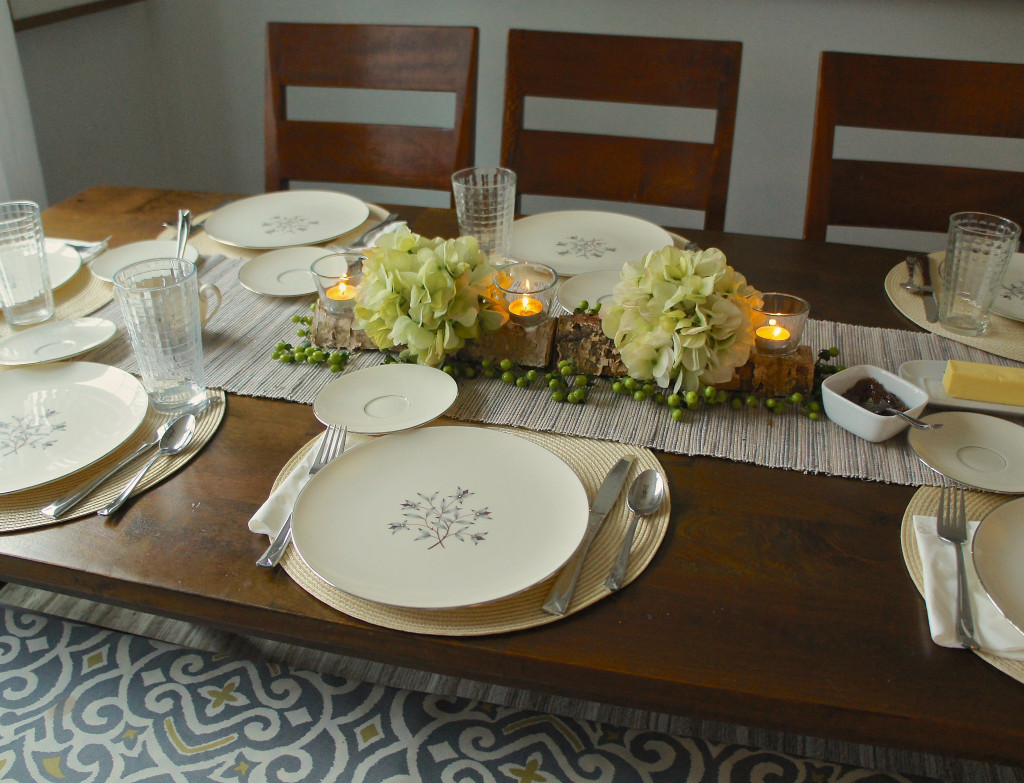 There you have it-a table and meal that took twenty-four hours to create and thirty minutes to eat. And the start of a tradition of baking and decorating with my little munchkins that we will cherish for many years to come.  So, all in all, it was a perfect Thanksgiving, even with tire tracks in our pumpkin pie.  Happy holidays! 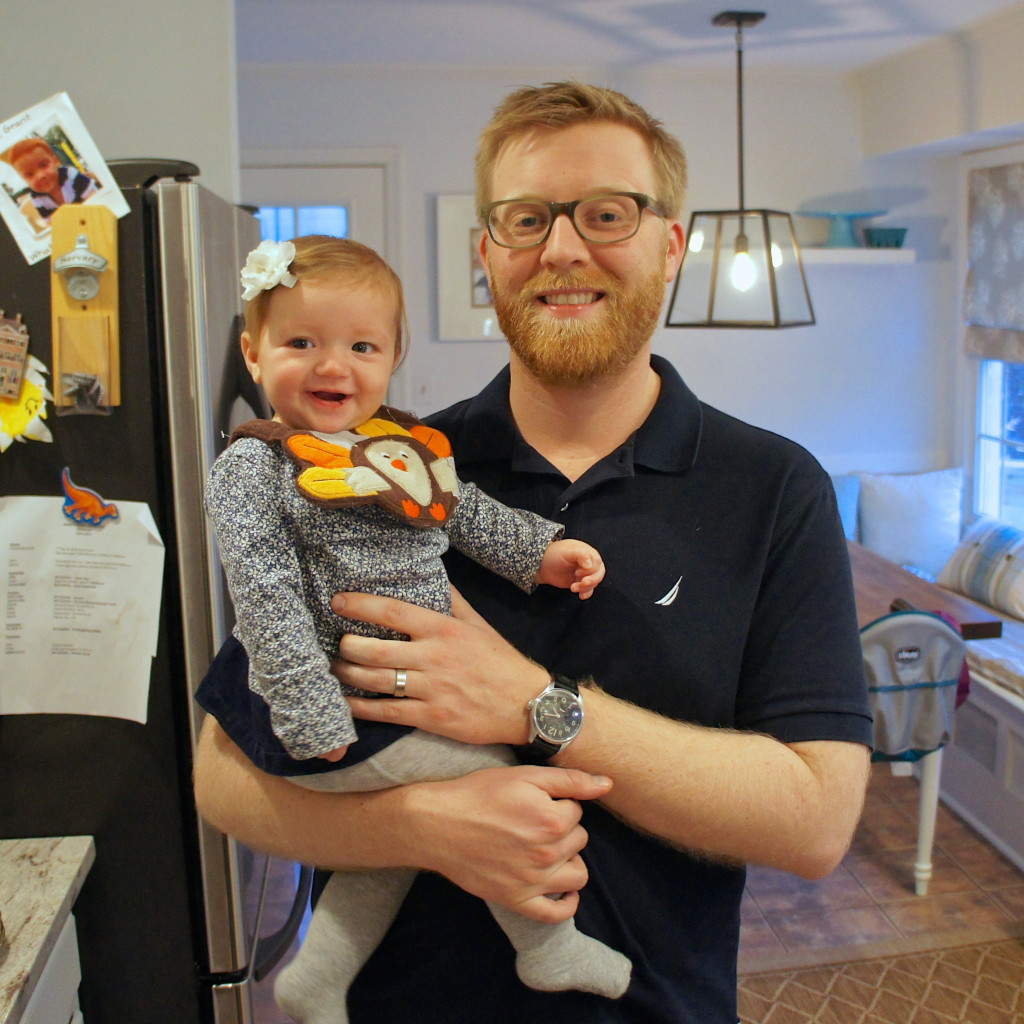