This is our mini-colonial, as I like to call it.  At 1400 square feet it has three bedrooms and three and a half baths.  We’re always in the middle of some kind of project, so I update this page as we go.  I linked as many product resources as I could.  Most of our hardware, light fixtures, etc. comes from the Restoration Hardware Outlet, so the links are to the real store (and the real price).  If you’re lucky enough to live near an outlet, everything is usually about 70% off, and they have a HUGE selection.  Feel free to ask in the comments section if I missed anything.

The front of the house hasn’t had much of an overhaul. 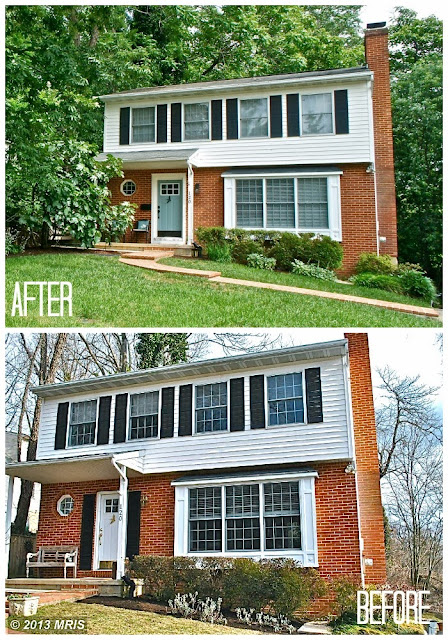 We have plans for new siding in the works, but that’s pretty far off.  There are few home improvement projects I won’t attempt to DIY, but siding is one of them.

After settlement, I didn’t even walk inside before removing these shutters: 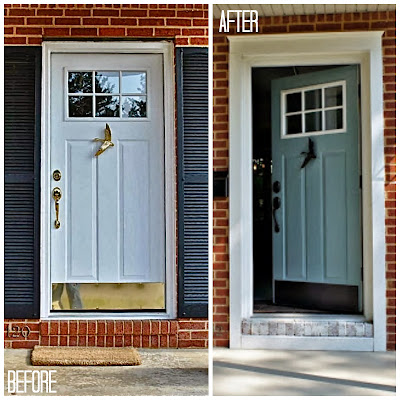 We painted the door with an “oops” can of Benjamin Moore Advance, and I spray painted all of the hardware oil rubbed bronze.   We also replaced the light fixture with Restoration Hardware’s Filament Sconce and bought a new mailbox, in addition to painting the concrete patio.

Unfortunately, I didn’t take any photos of the entry “before”, but we replaced the old brass light fixture (I attempted to spray paint it, but I broke the glass while taking it apart) with this chandelier-style flushmount from Pottery Barn.
We also painted the two-tone picture frame molding a solid white, and painted the walls Lily White by Benjamin Moore.  Every room in the house is painted this color (although it should really be called Lily Blue, shouldn’t it?).
In the living room we pulled out the 27″ deep built-ins and built new 8″ deep cabinets, along with a mantle, which we framed the tv over. 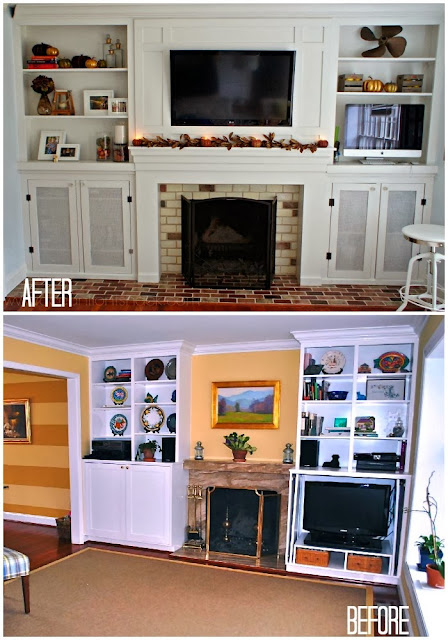 We still have a couple pieces of crown molding to repair, but the general idea is there.
The before photos were all taken from the MLS, hence the different furniture in our living room photos below.  Aside from the media center, we painted and added our West Elm Tillary Sofa, which is awesome for guests.  Each section is a twin size bed, so we can put regular sheets on it, and it’s so much more comfortable than a pull-out couch.  The After in the picture below is really more of a midway point: 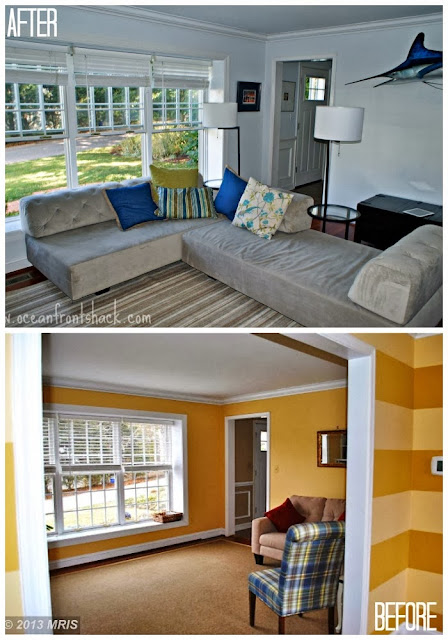 We bought a sideboard for toy storage  at the Pottery Barn Outlet that is actually patio furniture.  Then, recently, we moved the beige rug to the dining room and replaced it with one we found on clearance at Target, and bought pillow covers in muted tones to go with the rug: This is a view from the dining room: Unfortunately the powder room was too dated for the listing agent to include pictures on the MLS, and of course I didn’t get any good before pics.  Just check out the wallpaper and use your imagination. 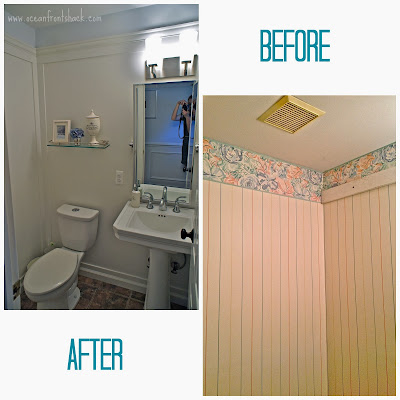 We found the pedestal sink top at the outlets for $24, and bought a random pedestal base at Home Depot for another $20.  That was the bargain of the century.  The toilet is from Costco, they sell dual flush toilets for $85, less than half of what you’ll pay anywhere else.  The mirror, shelf, and and light fixture, also came from the Restoration Hardware Outlet.  We used trim to cover the wallpaper with a faux wainscoting effect, here’s the how-to: 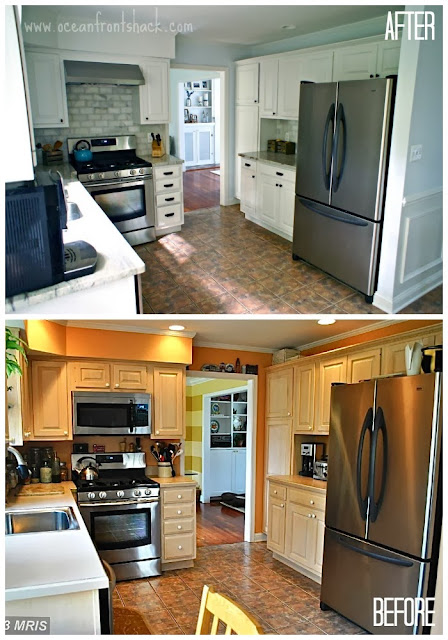 The kitchen got a major update, for a mere $3,000.  Not bad when you consider the average kitchen renovation costs about twenty grand.  I did a full post on tips, so check out the links below if you want more info. 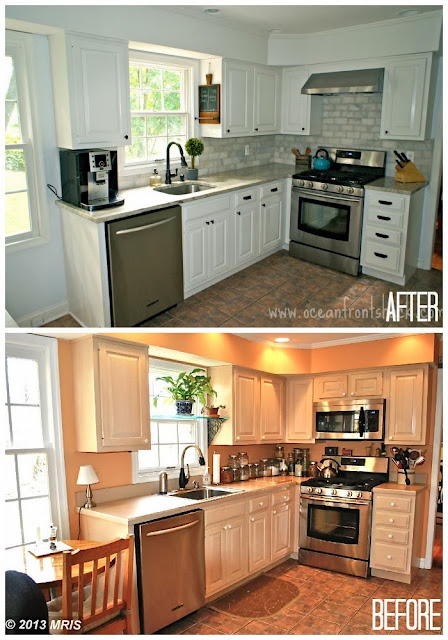 The only product links I could think of are the Filament Pendant and Nutone Range Hood.  The granite color is White River and our Backsplash is Carrera Marble.  We painted the cabinets and built the table and shelving, so most of this was DIY.

The dining room was the first room to get painted.  I started on those mustard and tangerine stripes the night we moved in.  The after picture below is another that is more of a mid-point: 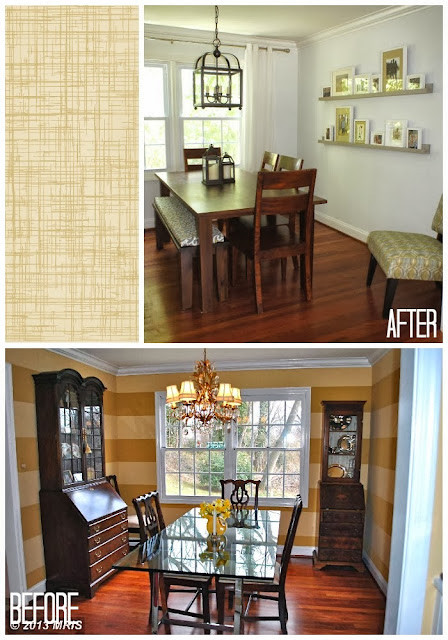 The previous owner took the chandelier, so we added a new light fixture (again, I bought this at the outlet, there’s no way I would have paid that much for a light), and we hung some curtains to frame the window.  Our table is Crate and Barrel’s Basque Honey 82″ with matching chairs and bench.  We also built photo ledges to display our family pictures, and because don’t have a playroom, made a narrow train table for Grant to play with. Ok, I think we are ready to move upstairs.  Or to the stairs, anyway.

We took a major risk here, because we had no idea what we were doing.  Our motto is usually, “If we have to hire a contractor, we may as well try it ourselves first.”  Luckily, pulling up the carpets and laying new treads and risers on the stairs was surprisingly easy.  It took about half a day.  I also added a stair runner to cushion the blow if the little guy ever takes a tumble down the stairs. 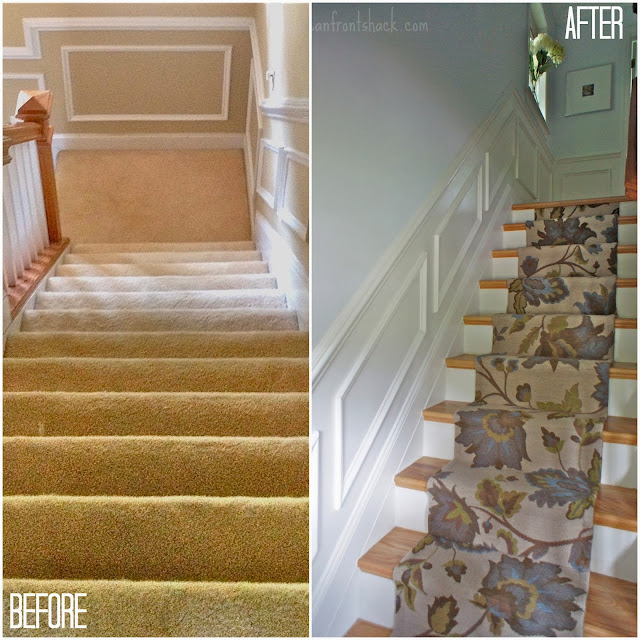 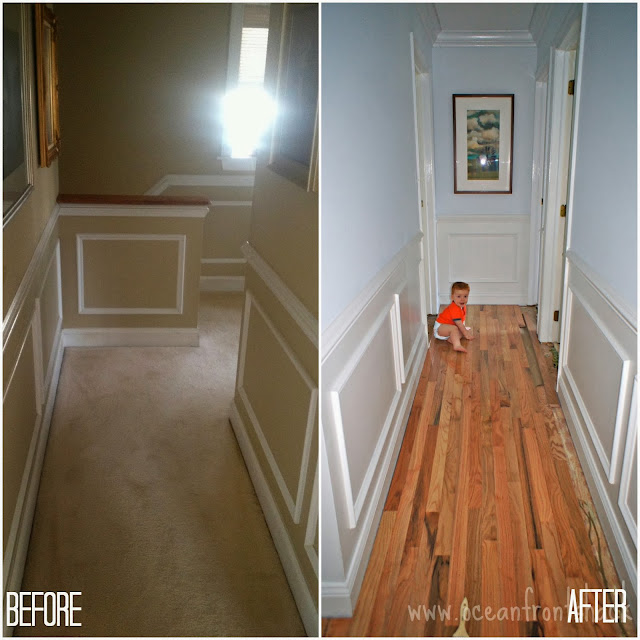 My editing was a little off in the picture above, the flooring color isn’t quite that orange.   If you look at the other picture of the hallway, that’s the color.  It still isn’t our first choice, but we’re working with a very tight budget, and we really wanted to do nail-down hardwood.  If we had chosen click lock flooring, which is less expensive, we could have opened up the color palate, but the click lock we did in the past never felt very sturdy, so we opted for the natural tone, nail-down floors.  Hopefully we won’t regret that decision later.  There aren’t any tutorials yet because we’re still figuring out the nail-down process (it’s a beast), but once we get into the bedrooms we will put up a how-to. 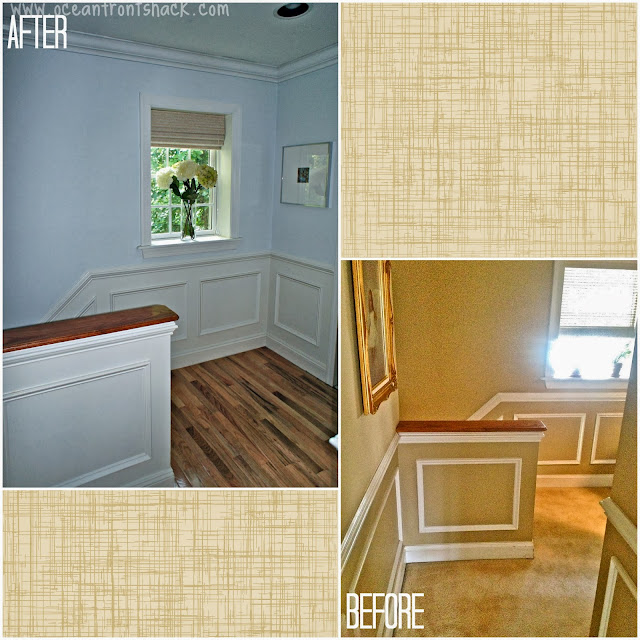 Grant’s bathroom was our most recent project.  It got new penny tile floors and we replaced the toilet. There’s also a link below the photo of the mini-makeover we did when we first moved in.  The whole renovation came to just under $500 and really made the room sparkle.  We’re loving what Grant calls our “ball” floor.  I may start penny tiling the entire house. 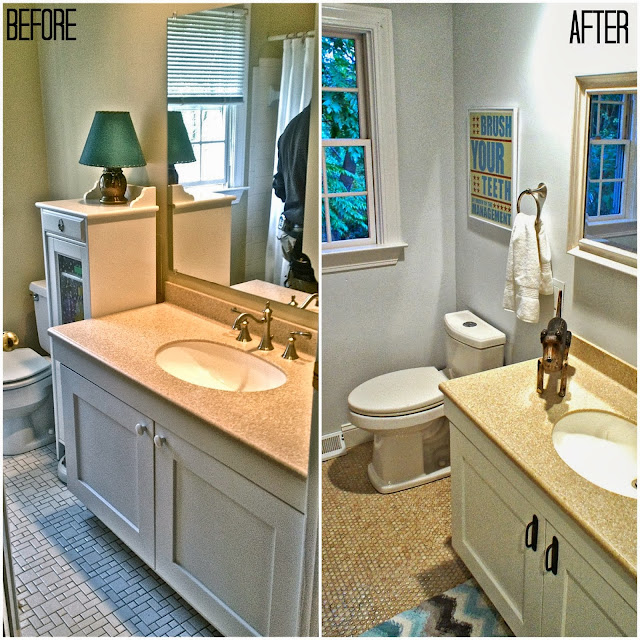 This is the room that is going to be the new nursery.  It is decorated as Grant’s room in the pictures below, but we recently moved him to the guest room, so at the moment it’s hardwood flooring central. 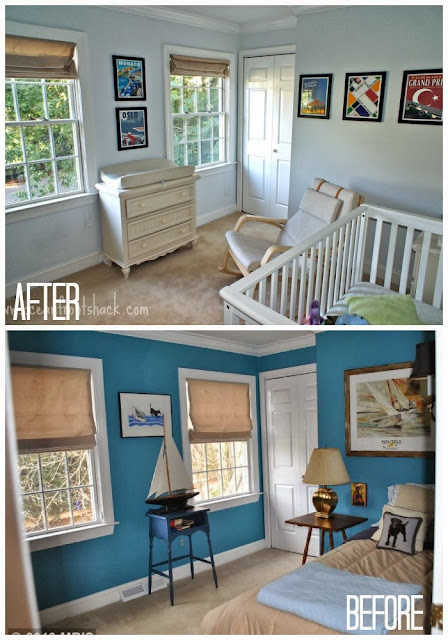 The master bedroom is usually the room we neglect until staging time, so this may be as good as it looks for the next 2-3 years.  The mattress and desk slammed up against the wall are from the guest room, but at the moment that is “Hardwood Flooring Base Command”, so our room is temporarily housing. 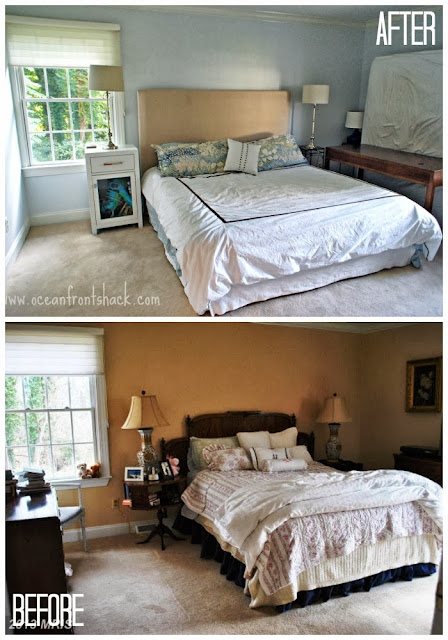 Grant’s room is the only room in the house where we’ve finished the hardwood flooring.  We also stenciled new curtains, painted a free crib, and repainted the walls. 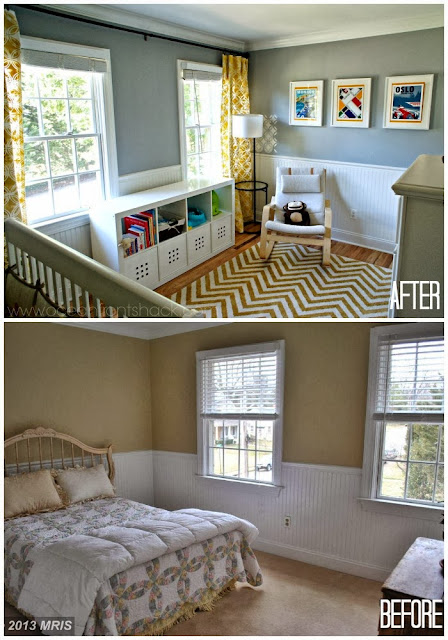 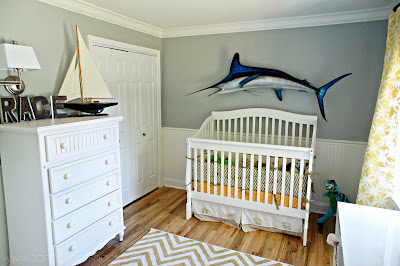 And last, but not least, our master bath.  We haven’t done anything in here, so in lieu of cleaning it to take photos, I’m just posting the MLS picture.  It’s a hot mess.  There are some good things going on, mixed with some not so good.  I think we are increasingly coming to the conclusion that we will have to gut it, but that’s a long time off.  For now, it gets us clean. 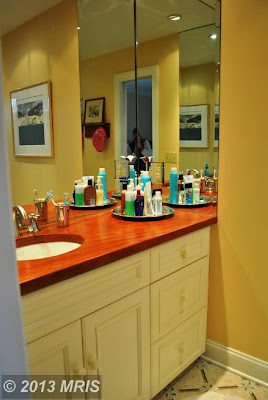 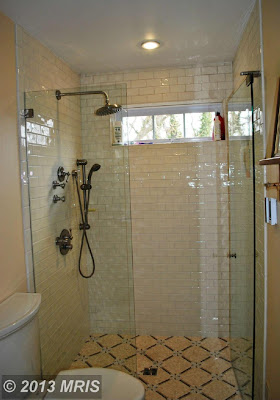 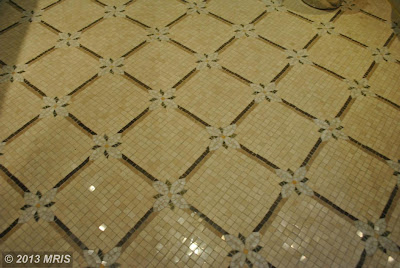 I’ll spare you the basement.  There are plenty of pictures on the site of us sawing down there.  We have some drawings sketched out of what we want to do with it, but for now we are working on floors.  At this rate we may be working on the floors for the rest of our lives.

Tags : before and after, house tour

Want to Know What We Did All Summer?